Our Turn Podcast has gotten its first review copy from a game publisher. That game is Oh Captain! designed by Florian Sirieix and published by Ludonaute. This is a light filler game that accommodates 3-6 players in about 20 minutes. In this game, one player is the Captain and the others are the crew. Everyone is shipwrecked on an island when they were saved by a mysterious sea creature called a Nukha. You are welcome to look around for treasure but leave the Nukha eggs alone. They are sacred and worth negative points at the end of the game.

As each crew member finds a treasure (by drawing a card from a deck that is passed around) they have to tell the Captain what they found and wait for the Captain’s decision on if she will buy it from them or not. If the Captain declines, then the crew can use the object to try to get loot from her comrades. However, the crew members are not required to tell anyone the truth about what they found. If they try to shoot someone, for example, and their bluff is called, they have to reveal what they did find. 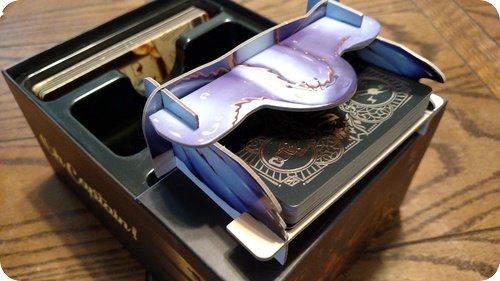 The game ends when the Nomads card is drawn. The nomads buy pistols, grappling hooks, and lizards from the individuals with the biggest majority of each type. The richest player wins.

I have high praise for both the components in this game and for the box itself. The message in a bottle marker is a unique way to designate who the current Captain is. The cards are of good quality and easy to shuffle and the artwork is lovely and easy to understand. The player mats and coins are nice stiff cardboard and are easy to understand once the symbology is explained during the rules explanation. The box is an unusual one for a game. It’s closer to a cube than a traditional game box, however, inside the box all of the components, including the deck holder that gets passed around the table, all have spots in the box organizer and they stay where they are put. Thank you Ludonaute for thinking that part of game production through. Everything is stored nicely and protected during travel to game nights and for storage. 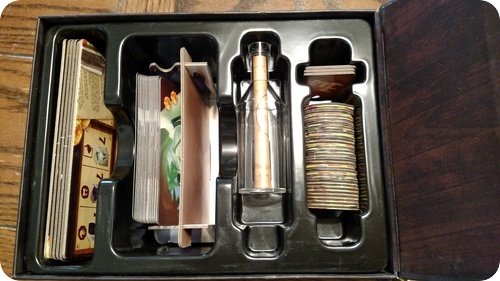 This was a fun, light, social deduction game that invites the players to do a bit of piratey role playing. My friend Amy came in second place by telling the truth every time. At first, we all believed she was telling the truth, but after awhile we figured she must be lying, but she wasn’t. She only lost that game by one coin. We played a second time and both times we had a lot of fun. Because this is a light filler game, and a bit silly, I give this game a 4 out of 5 on our scale. It’s a good solid game that I look forward to playing with both gamer and non-gamer friends alike.

We have started referring to and rating games by a rating scale. Here is how we are using this scale: